While a large part of our programs are centered around the process behind the creation of a book, we also do several programs where student work is not published in anthologies, but is instead celebrated in other ways.

This year, twelfth graders at DeWitt Clinton High School read author Amy Waldman’s book The Submission, a novel about an anonymous contest to design a memorial at Ground Zero, and the uproar of journalists and politicians when they learn that a Muslim architect wins. The book helped the students answer the question, “How do you decide how to memorialize an event?” which was an important part of their curriculum.

After reading the novel, the students held an ethical discussion with Amy, which included questions about why she chose to write the book and how she came about its topic. Then, the students visited the 9/11 Tribute Center.

On their visit, the students learned a lot about what it takes to build a memorial, and how architects go about constructing them. They learned about writing memorial proposals, and then they were tasked with composing their own 750-word proposals to commemorate an event in history of their choice.

BtB organized a group of DeWitt Clinton alumni to volunteer in the classroom to aid students in revising their works, and discuss their projects’ merits and strengths. The students were highly appreciative of the alums’ visit. When they finished their work, the students presented their proposals to the class. Overall, the project emphasized the significance of history, writing prowess, and public speaking skills, all of which the DeWitt seniors will continue to build upon in the future.

Even though they did not produce a published book, the seniors at DeWitt Clinton High School were still able to develop a deep appreciation for books, authors, and writing. They were able to sharpen their skills and build mastery experience, which is invaluable to a reader’s self-confidence level.

Of the program, one student said, “It was nice to meet someone with such experience, and who has had such an influence on our society.” Another said that hearing Ms. Waldman present her ideas to the class added some “inspiration that I could not get just from reading the book.”

After the students had finished their work, their teacher, Mr. Ray Pultinas, submitted his lesson plan and the work his students had done during the Behind the Book program to the 9/11 Tribute Center, and he won their Teacher Award for helping create an exemplary educational project that sustained the memory of the 9/11 attacks.

The students’ work was definitely a great success!

Time for a book celebration!

Recently, the second-grade students at PS 76 worked with Renée Watson, author of Harlem’s Little Blackbird, to write their own stories about their dreams and aspirations. At first, the students were nervous to read aloud to the class, but with gentle encouragement from Behind the Book founder Jo Umans, all of the students faced their fears and expressed their dreams. After working with Watson and the Behind the Book staff to revise their stories, the student created illustrations corresponding to their written work. Our Dreams is the final product of the second-graders’ hard work and creativity.

But what’s a book celebration? Behind the Book strives to not only improve the students’ literacy but also boost their confidence. The process of publishing a book demonstrates mastery in reading and writing, and book release parties instill a sense of accomplishment in students. As a result, students are more likely to continue reading and writing in the future.

The second-graders were thrilled to view their work. Each piece was completely unique. Some students wanted to be teachers and veterinarians, while others opted for riskier routes (think ninjas!).

Students compared their original work to the published book and noted how professional it looked.

One student slid into the “Author’s Chair” and flipped through the anthology.

Congratulations to the second grade class at P.S. 76! We know your new found love for reading and writing will carry you far!

Author Susanna Pitzer was greeted with shrieks and hugs from the first-graders at CS 21. Looks like it’s time for a book release party!

A couple weeks ago, the students read Not Afraid of Dogs by Susanna Pitzer, which depicts a young boy who overcomes his fear of dogs. Then, the class created a collaborative story about a friendly, dessert-eating vampire. But soon it was time to pen their own narratives, all paired with crayon and watercolor illustrations, about characters facing their fears.  Scary Fables is the final outcome of their courageous tales.

At the book release party, Pitzer scrolled through the pages of Scary Fables on the classroom’s Smart Board. The students’ eyes lit up with excitement as they recognized their names.

Each student stood up and read the title of his or her story to the class. Some were shy, some more verbose, but all were very enthusiastic about their published pieces.

Executive Director Jo Umans supports one shy student as she reads her work.

In “Not Afraid of the Dark,” Brianna voices her fears about not wearing glasses in her room at night.

A student named Cassius recalled an illustration from the story “Not Afraid of Frogs,” which demonstrates the power of realistic pictures.

Book release parties allow students to witness their mastery of reading and writing. Clearly, celebrations are effective, because the students were overcome with an enormous amount of self-confidence and pride in the classroom-turned-stage. Whatever initial fears they had about reading aloud were certainly crushed by the end of the day!

In response to the question, “Why are we here?” a student raised his hand and said, “To celebrate all the work we’ve done!” and indeed, he was right. As we’ve written here before, the second-graders at CS 21 have done some awesome work with author Isabel Hill to learn and write about New York City architecture.

After reading Building Stories and Urban Animals by Isabel Hill, the students ventured through Brooklyn neighborhoods to see what treasures they could find. Sharice, an enthusiastic student, recalled that Urban Animals was about “buildings, and how rough or soft they were. We also learned about shapes.”  The class scrolled through their books on their Smart Board, smiling and shouting in excitement over their and their classmates’ work. Enthusiasm was palpable when the students held their published books in their hands for the first time.

The students reminisced about Ms. Hill’s visit, chattering excitedly about when they photographed and described the different buildings they saw in their neighborhood. When the students saw their final pieces of work in their published book, it was clear that they saw the unity in the projects they’d worked on all throughout the year. They were finally able to understand that their hard work and enthusiasm about the project only made their finished product all the more incredible.

Everyone was very proud to see their blurbs matched beside the different architectural structures they studied. It was cool to learn that their work might someday teach other people.

The kids were evidently glad to see their work. Nayshon exclaimed, “My book is awesome!” Hopefully, their newfound enthusiasm for literature will only grow in the future.

These students worked with author Andrea Davis Pinkney. They read her book Sit In: How Four Friends Stood Up by Sitting Down, and then, with her help, wrote their own persuasive essays on topics of their choosing. They wrote about all kinds of things – from the quality of school lunches, to gun violence in America.

Their essays were then anthologized in their very own book, Say It Loud and Proud: Stand Up for What You Believe.

After proudly reading their statements to their classmates, the students all got to enjoy some cookies and have some fun! It was a really great day!

You can see more photos from their event here.

A subway ride to Brooklyn with nearly fifty books in tow? Time for book celebrations!

Behind the Book creates published books for all classes that complete programs. Each book includes a table of contents and title, copyright, and dedication pages. But what is the purpose of the published book? Significant research indicates that when students view their own work, their confidence grows. Behind the Book students have achieved mastery in writing and drawing, which motivates them to pursue those activities further.

The book celebrations took place at PS 46 located in Fort Greene, Brooklyn, in Jessica Lischin and Miriam Bowen’s second grade classrooms. A couple of weeks ago, each class welcomed Douglas Florian to present his book Poetrees, which includes an array of poems and illustrations based on plant life. Inspired by his book, the rest of the students composed poems and sketched drawings. One second-grade student gushed, “It was so exciting and so special that he came here.” Another exclaimed, “I had a fun and special day!” Miriam Bowen stated that the students were “so excited to meet the person behind the name on the book.”

Yesterday, as Micaela Gutierrez handed out the books, the students were enthralled to see their own hard work right before their eyes. One student named Destiny explained that the entire experience was “a little bit hard, but fun.” Another student named Dalila explain, “It makes me want to learn more.” Esmerelda gushed, “I learned to rhyme. I like writing now.” Evidently, the book celebration was a success. Hopefully, the students will hone their skills over the summer and embark on the quest of becoming life-long readers and writers.

Yesterday, our seventh graders from JHS 13 and some parent chaperones visited the African Burial Ground as part of their experience reading Zetta Elliott’s Ship of Souls.

In this young adult novel, the main character, D, and his friends Hakeem and Nyla are led across Brooklyn, in a journey steeped in history and suspense, that ends at the African Burial Ground. In a similar journey, our students ventured there with Ms. Elliott to learn about the sacred grounds. 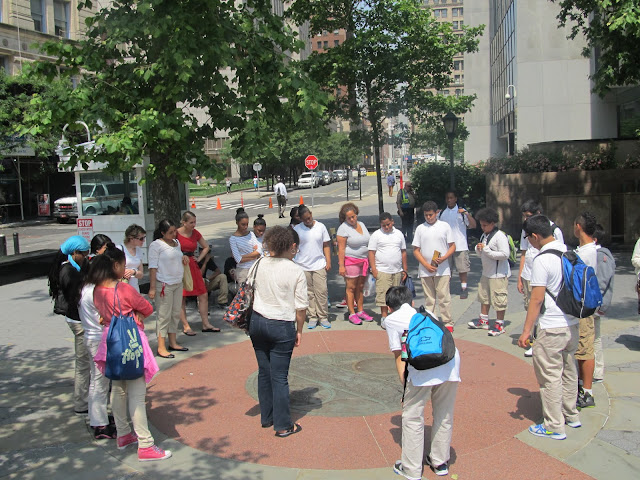 Students look on as author Zetta Elliott explains that thousands of African bodies from colonial times lay hidden under Lower Manhattan, the only designated place for people of African descent to be buried at the time.

Ms. Elliott also helped boost enthusiasm for the burial ground by imparting her own knowledge.

“These are the graves they found,” she told the students. “They uncovered 419, and almost 40% were remains of children.” 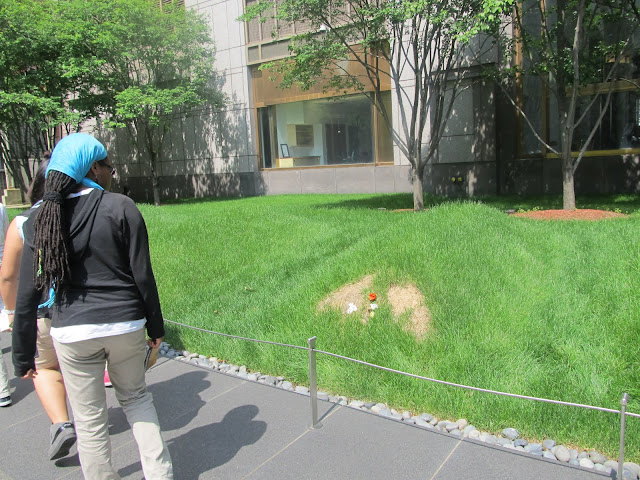 Ms. Elliott’s contributions were definitely informative, and effectively brought the stories of the African slaves to life.

In addition to the supplements provided by Ms. Elliott, students interacted with the museum’s educational tools, like informational videos and a barrel on wheels that demonstrated just how physically taxing the slaves’ work was. 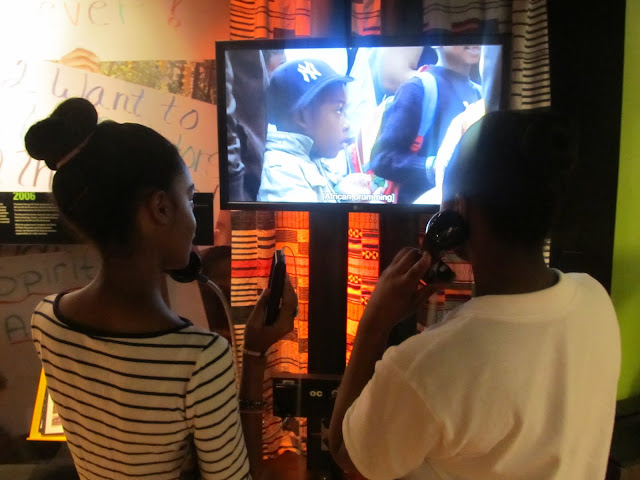 Two students listen to news coverage about the 1991 activism that led to the reburial of the African remains. 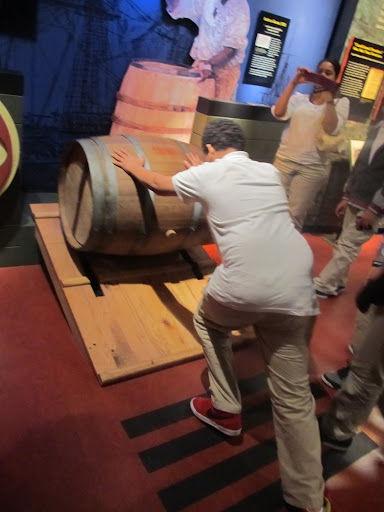 One student puts all his might into pushing the barrel up the platform to experience the labor African children did in the 17th and 18th centuries.

These tools really helped connect the students and parents with the lives of the slaves.

“Wow, [the African slaves] went through so much and died so young,” remarked Maggie. “It’s so sad; I cried in there.”

Despite the heat and the somber nature of the stories they heard, the students appeared very engaged and interested in what they were learning.

Marek, a student particularly enthralled with the burial ground, asserted his enthusiasm at the end of the day. “I really like to learn about things like this.”

Behind the Book
Blog at WordPress.com.